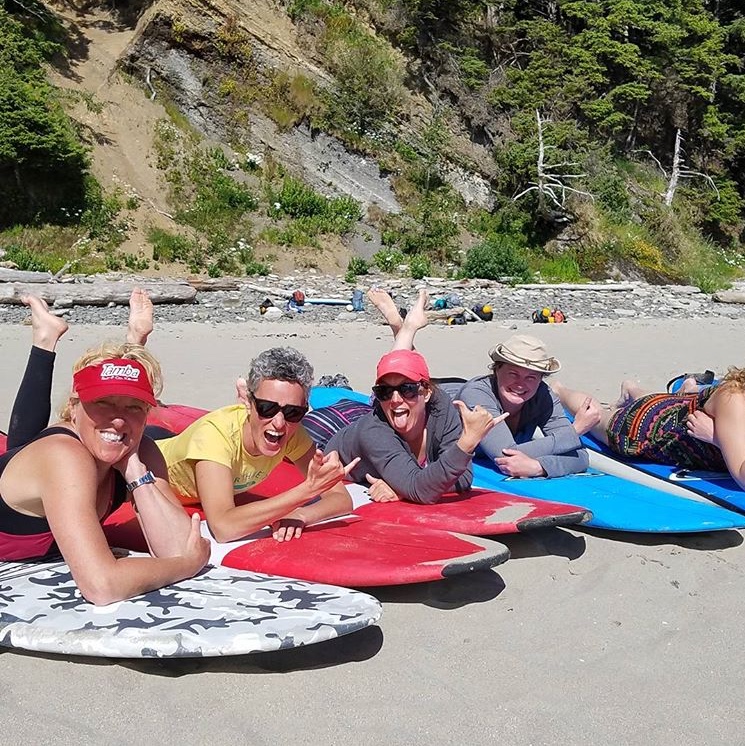 It was July 8th, 2017. We walked down the long, gently sloping path. The trees were decorated with moss ornaments that hung like flowing hair. As the trail dipped through the shade of the trees, the path eventually spat us out into an open area on a short cliff that overlooked the beach. The blue of the sky met the blue of the ocean in an embrace. I watched the waves curl over like a baby’s hand griping his mom’s finger.

The ocean always soothed my senses like the briny air, the tumbling waves, the water reflecting the sun’s light but that day was a little different. I was taking my first surfing lesson and fear played through me like a needle stuck on a record.

I was with a group of all women and three women instructors. The day began with getting our surfboards for the weekend. These surfboards were like foam icebergs; they were huge, thick and unsinkable. My board was 9’2”, and it was 4 inches thick and 2 feet wide. It was just as much of a workout to carry the board to the beach as it was to surf. We also learned about the intricacies of the beach like rip currents, and the best conditions to surf in like wind direction, tide times, swell intervals, and wave heights.

The lesson then continued on the sand. The next challenge was getting into our 5mm wetsuit. The ocean on the Oregon Coast hangs out at about 58 degrees and wearing a full wetsuit is pretty much a requirement. Everyone always wore boots, but the gloves and hood were optional, which I did opt out of. The suits were skin tight, and it was like trying to put on and wear one big suction cup. Once we were suited up, we practiced sand surfing.

We worked on our form for paddling out to the waves; we balanced in the center of our boards scooping the sand back with cupped hands. We pushed into plank pose when imaginary waves were coming while we were paddling out. We churned our legs like a hand mixer practicing turning the board around in the water while sitting on it and waiting for the right wave. When we saw the imaginary wave we wanted, we slipped onto our stomachs and slid back on the board until our toes touched the edge of the board, and we started paddling hard to catch the wave. The final step was pushing up into an almost upward facing dog or a push-up with the knees down, then “popping up” to standing to surf the wave. I was considered a regular which means my left foot was out in front and my right foot was in back. It is called goofy if a surfer puts her right foot out in front and the left foot is behind. My body pointed towards the right side of the board. My shoulder was supposed to point in the direction I wanted to go and both feet were parallel on the board just a little more than hip distance apart. On the sand, this seemed logical and simple enough. Until it was time to apply the lessons in the water.

I remember walking towards the water as the panic began to ring louder, yet I just kept walking. The waves began to move higher up my legs slowly reaching towards my chest. The power of the ocean shoved me back as I continued to push forward.

I practiced sliding up on my board and paddling and pushing up on my board through the waves. Prior to this moment, I normally hung out in waist deep water. Now I was in a full 5 mm wetsuit, on a surfboard, paddling farther and farther from shore as the waves continually crashed into me and my board.

I have to admit my first day surfing I was not really brave. I had never participated in any water sports before. In fact, I had never participated in any snow sports either like snowboarding or skiing. This really was a brand new experience, and I had nothing to reference. To begin, we rode on the white water. After a green wave breaks it turns into white rolling water that pushes towards the shore. That is what we began learning on. There were three other women in my group and one instructor. Our instructor stood in the water and gave tips and advice. She took turns helping each of us pick waves and telling us when we should paddle.

I will admit as I sat on my board my fears tried to creep in like a wild cat stalking its prey. I was concerned about my lack of experience in the water.  I was nervous about being in the wide-open ocean; there were rip currents, not to mention the waves. I also kept waiting for a fin to break the surface at any moment. But I didn’t budge. I didn’t let my fears chase me from this experience.

The first wave I caught I didn’t even try to stand up. The wave felt like it was moving so fast; it took me by surprise. It was like being on a roller coaster that was rushing down the tracks, and all I had to cling to was my board. Even though I didn’t even attempt to stand up, the thrill was just as strong. I felt my lips turning into a smile. A laugh escaped from my mouth. My heart was fluttering. I may even have squealed as the board started to reach the shore. When my surfboard stopped, I couldn’t wait to get back out to the instructor and try again.

As I was waited for my second turn, I was sitting on my board facing the shore. The waves moved under me as I stared at the tree-covered, rocky cliffs, the chunks of driftwood, and the seagulls floating and riding on the wind. The beauty of the landscape was powerful, and it began to ease my fears. A calm settled over me; I had inhaled the peace of nature.

I am not sure what I thought about surfing prior to this day. I knew surfers were toned, skilled and seemingly fearless, but I had no idea how tough and tiring surfing really was. On my first day of surfing, and I don’t even know if I can call what I did surfing, I rode the surfboard in on my stomach and sometimes on all fours, and I never stood up. I made it one hour, and I rode in about 8 waves before my body felt drained.

My initial feeling was disappointment, but I was overwhelmingly proud as well. I never thought I would push my limits like that. I realized how much fear and anxiety tried to live my life for me at times. The more I caved in to the fear, the louder it got. I realized I didn’t want to hear the voice of fear anymore. I didn’t want to hold myself back.

The next morning was the second and final day of our lesson. I wasn’t sure what I would be capable of because I was sore; my hands were like 50 pound kettlebells weighing my arms down. However, today I was determined. As I drove to the beach, I vowed to turn my disappointment from the previous day into satisfaction. I told myself I was going to stand up or at least attempt to stand up on the surfboard.

That morning we changed instructors as well, so we could learn from someone different. My new instructor, Dani, and I had a great connection. The first question she asked me was, “What would you like to accomplish today?” Instantly I replied, “To stand up.” She smiled and nodded.

As we were waiting for a wave, Dani was pumping me up. She told me to repeat this mantra in my head, “I will stand up. I will stand up.” I had that in my mind as I caught my first wave, but I made it to my knees and rode the wave like I was a dog. When I paddled back out, Dani assured me it was okay. She encouraged me and told me to repeat my mantra again and just commit to standing up.

Dani and I picked out another wave together. She said, “That wave is yours!” as she pointed to a wave forming in the near distance. I quickly went from sitting on my board feet dangling in the water to slipping onto my stomach. I scooted back until my feet were at the edge of my board. Dani shouted, “Paddle!” I started digging my hands into the ocean pushing the cold water back as I repeated in my head, “I will stand up. I will stand up. I will stand up.” I felt the wave lift the back of my board up which was the sign it was time to stand up. I began to push up on the board with my arms, and I slowly popped up and brought my left foot forward on the board. I couldn’t believe it. My body finally followed suit on what my mind had been telling it to do. I only made it a few seconds standing up on the board before I “starfished” off. But for that fleeting moment, I was in sync and in perfect harmony with Mother Nature. It opened my eyes to a new level of being alive.

This is a text widget. The Text Widget allows you to add text or HTML to your sidebar. You can use a text widget to display text, links, images, HTML, or a combination of these. Edit them in the Widget section of the Customizer.